Micromineralogists of the National Capital Area 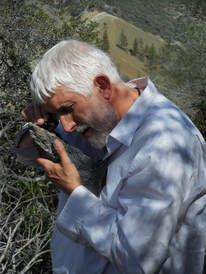 Speaker: Herwig Pelckmans
​President of the Mineralogical Society of Antwerp, Belgium
​Program talks: #1 Belgium and Mineralogy,  #2 The Many Faces of Fluorite,
#3 The Unknown Mineralogist, #4 Topaz and Friends
Herwig Pelckmans was born in the summer of '62 and grew up on the outskirts of Antwerp (not Antwerp, New York, but Antwerp in Belgium). When he was 10, his parents gave him a comic book, on the evolution of life on earth. One section dealt with paleontologists finding dinosaur remains in Mongolia. It did not take long for Herwig to find large bones and teeth himself. The fact that they later turned out to be whale bones and shark teeth, instead of dinosaur fossils, did not really turn him down; the collecting bug had already taken over.

Ever since, his travels and collecting trips have brought him and his family all over Europe and the United States, and even to some countries in Africa and Asia. Besides, he loves to write mineralogical articles and give talks for mineral clubs. Since last year, he is the president of the "MKA" (= the Mineralogical Society of Antwerp; one of the most vivid mineral clubs in the world). Herwig is also promoting the use of the polarizing microscope and the spindle stage as inexpensive and reliable tools for mineral collectors who want to identify their unknowns in a scientific way.

Herwig retired from his job as an officer and a database administrator for the Belgian Army in 2013, and soon realized life is even more hectic when you are retired. He lives with his loving wife and three kids in the small town of Hasselt in Belgium. He has presented at Tucson, Rochester, Redlands, Placerville, to name a few.
Powered by