Micromineralogists of the National Capital Area

Save the date: April 2023 projected (originally scheduled for 2020)

Speaker biographies:
Michael Pabst: Michael Pabst is a retired professor of biochemistry who has collected minerals all his life. He is Treasurer of the Micromineralogists of the National Capital Area (MNCA), and President of the Shenandoah Valley Gem and Mineral Society (SVGMS). He writes a monthly column on microminerals for the Mineral Mite newsletter of MNCA. His mineral photography has gradually improved over the years, allowing the creation of PowerPoint talks with some pretty photos. He has a long-term interest in minerals containing rare-earth elements, like Cerium and Lanthanum, and their neighboring elements in the periodic table, including Scandium, Yttrium, and Uranium. He will collect any colorful mineral, if it is small enough and cheap enough. He and his wife, Karen, like to travel and check out mineral museums in distant lands.

Scott Duresky: Scott is a self-taught mineralogist who first started collecting on the dumps of the Rutherford Mine pegmatite in the late 1960's. Early on, he received extensive lessons in the field from the late Frank Crayton, a research chemist with Philip Morris in Richmond. Over the years, Scott collected in the pegmatite over 100 times, amassing a large and representative collection of the pegmatite's rare species and rare-earth minerals. He began the laborious process of meticulously examining every piece of the material he had acquired, using both an illuminated lens and a stereo microscope, aided by a wide variety of research materials that was available to him.
In 2014, Scott began working with Michael Pabst of the MNCA on the project of taking numerous photomicrographs of representative species, as well as putting together this accompanying Power Point presentation. In 2016, Scott received the generous donation of a lifetime's worth of small Rutherford Mine specimens from Pete McCrery, a long-time member of the Richmond Gem and Mineral Society and a friend. Afterwards, Scott began working with Tony Nikischer of Excalibur Minerals for the purpose in identifying the individual species in the recently organized Microlite Group of the Pyrochlore Supergroup that occurred at the Rutherford Mine. While the research for this project is ongoing, and the tentative species identifications awaits further confirmation with Raman Spectroscopy and/or X-Ray Diffraction, this presentation accurately reflects the information gathered so far.

Steve Stuart: Steve is a retired fire protection and risk management consultant, since January 2016. He and his wife moved to Bethlehem, Pennsylvania in April of 2017, from Detroit, Michigan. His childhood interest in chemistry, nature and minerals was rekindled in 1995 when he started to collect fluorescent mineral. In the late 1990s, he bought a stereo microscope, which opened up a whole new world for him. Steve posted his first photo to Mindat in 2004, and now has over 2,500 images on Mindat. He has attended the Atlantic Micromount Conference since 2017. Steve is a member of the Canadian Micromineral Association, and has edited their newsletter, the MicroNews, since 2016. He is the first “Yank” to serve on the CMMA executive committee, so he was told.

Michael Seeds: Mike was born and raised in Illinois and discovered astronomy in the 6th grade. He was a Physics major at the University of Illinois and MS and PhD in Astronomy from Indiana University (1970). He taught at Franklin and Marshall College for thirty-two years. In the early '70s, he began writing astronomy textbooks. Mike has published 8 different books for teachers using different approaches to introductory astronomy. Counting all the editions of all the books, he has published almost 70 editions of the books. They are used all over the USA, South Africa, Korea, Australia, etc. and have been translated into Spanish and Japanese. He is mostly retired from writing now, while his coauthor does 90% of the work. Mike became interested in minerals as a kid and returned to it in the 1980s when his little daughter started picking up rocks. One year, they vacationed in Tucson and by accident heard about a "big rock show in the convention center". That cemented the family’s interest in minerals and geology. Mike always enjoyed the microscopes at local rock shows, and one day the people behind the table turned out to be the Weinberger’s. They gave some encouragement, so Mike bought his scope in 1998. Following their advice, he came to the Desautels Symposium in 1999. It was Betsy Martin who sat in front of him. She turned her chair around and gave him at least an hour of lessons in micromounting. Mike has been collecting ever since. ​ 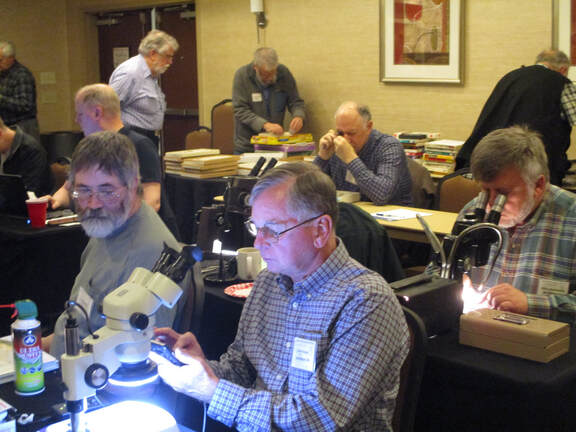